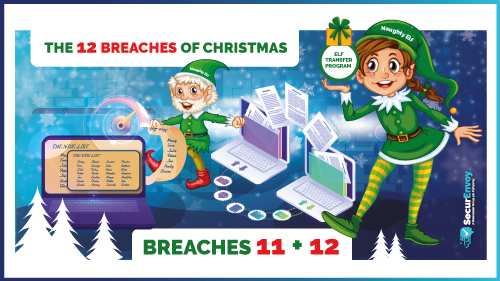 As we get closer and closer to the big day it seems that this Bad Elf is still trying to steal your sensitive data but once again the wondrous SecurEnvoy has certainly been the tool that saved Christmas and stopped him in his snow tracks.

You’d think he’d have learnt by now that whatever he tries to do to steal your list will be blocked but he’s persistent we detected 2 attempts today the first was where he tried to print screen the data from a protected file, and this was blocked as you can see

Next, he tried to use a file transfer program called WinSCP (Winter Santa Copy Program) to upload the data to an externally hosted file location, but we used the built in application controls to block the application from running and this thwarted that attempt to steal your data, the great thing about it is that anytime any elves install a new piece of software the list is updated and we can keep track of what is and isn’t allowed to be used.

We’ve rigged his elftop to shower him in Christmas sparkles next time he turns it on as a punishment.

Ho h oho that last bit made me choke on my cocoa and cookie, Mrs Claus wondered what I was laughing so hard about.

As we approach Christmas I just wanted to thank you and your small team for keeping on top of data security at the North Pole and it seems like our investment in to SecurEnvoy DLP has really paid off stopping this Bad Elf from ruining everyone’s Christmas.

I shall certainly be speaking to him before I load my Sleigh and set off to deliver presents later.

Why are Christmas trees so bad at sewing?

They always drop their needles!