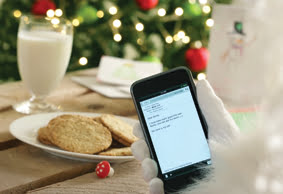 Christmas – a time for friends and family, and emails apparently!

Paranoia will mean the UK’s working population will still have one eye in the office while relaxing at home with the family on December 25.

A survey of 1,000 people in employment, conducted using OnePoll, has discovered that 46% of the adult working population won’t be able to resist sneaking a peak at their emails over the Christmas break with 15% confessing they’ll be looking at them frequently and 31% intermittently. Only 34% said they will not look at any work emails over the festivities. Sponsored by SecurEnvoy – the global leader of tokenless two-factor authentication, the survey reveals that, while 21% of people say that it isn’t necessary or expected for them to be in touch with their company over Christmas, one in five people will feel competitively disadvantaged if they don’t look at their emails during the holiday period, including the big day itself.

Interestingly it is the younger element of the workforce that feel the most pressure with those in the 18-24 year old bracket most inclined to look at their emails, while the over 50s feel a little more inclined to kick back, relax and not worry about looking at emails.

It would appear that we do still have some boundaries as 18% said that, if their boss or work colleagues tried to ring them or contact them during the Christmas celebrations, they’d be very annoyed, with 28% left feeling very angry if they received a call on their personal phone!

Worrying, what the survey also revealed is that, at this festive time of year, security is the last thing on anyone’s mind. Forty-six percent of people confessed that they don’t use any sort of security on their phones, not even a four pin passcode, even though almost half will be looking at their business emails that could include sensitive information and unencrypted documents.

Statistics confirm that homes are more likely to be targeted by burglars in the winter months, with domestic break-ins rising by 63% during this time. Longer hours of darkness and homes filled with extra items in preparation for Christmas are two of the biggest factors which lead to higher levels of burglaries. With this in mind, Andy Kempshall, SecurEnvoy CTO and co-founder warns, “If you’re accessing the corporate network to retrieve emails, or look and work on sensitive documents, the device you’re using could pose a threat to your company’s security. With 46% of the people surveyed not bothering with any form of security, and 41% using just a pincode which is proven inadequate, should Santa, his elves or someone a little more sinister drop by and liberate your phone, they could be stealing much more than your contract minutes and texts. Christmas is a time to relax, but that doesn’t extend to relaxed security. Have a very merry, relaxed but secure, Christmas.”