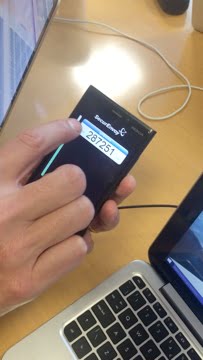 Authentication just got even easier than using a password!

Our vision for the future has arrived; users can easily tap an NFC ready device, phone or wearable device to to authenticate themselves as the user! Imagine how easy that would be for moving cash or paying bills, for social media users to quickly authenticate a session, for remote users logging into their remote desktop or even a series of cloud applications; all allowing me to tap and go! A regular route I’ve taken recently is the 96 tram; arriving at Bourke Street to take me over to East Brunswick. When I first arrived in Melbourne I set up a PT card, once credit is added I can use this to get on and off any public transport(PT). Similar to the ones I’ve used in Singapore and Hong Kong, they are using NFC, a relatively new protocol called Near Field Communication which allows the signal to communicate from one NFC sender to an NFC receiver. The card I use on the tube or tram to swipe on and off allows me to prove it’s me and transfer the necessary funds from the credit on the card to the provider. In London they use the Oyster card to travel on public transport, as they do in South Africa on the Gautrain and as I’ve also experienced in New York, Atlanta and Denver to name a few travel cards I’ve used on my travels as it’s a proven technology people use daily!

One thing they all have in common is the NFC technology being used to simply and effectively allow users to adopt a user friendly system that doesn’t require training, needs no special hardware and makes it easy to top-up and administer. This same technique was adopted by SecurEnvoy three years ago for authenticating users remotely for which a patent is pending on its use.

Our vision for the future is now here ready for use today, users can easily tap an NFC ready device, phone or wearable device to to authenticate themselves as the user! Imagine how easy that would be for moving cash or paying bills, for social media users to quickly authenticate a session, for remote users logging into their remote desktop or even a series of cloud applications; all allowing me to tap and go! Well that’s the reality that SecurEnvoy bring with their new V8 release. I’m already using it where it allows me to tap my phone to my tablet and that’s it! I’ve added a biometric to my phone to access the app, and a PIN which I do anyway to access my tablet and laptop, and then just a tap and I’m in – a tap is all it takes and the NFC on my app talks with the NFC on my tablet and the session is created. Like the tram I took earlier, my tap on and tap off just doesn’t get any easier, with two factor authentication the game is changing and rapidly.

Who will wait about to put in a username, a password and then wait for an SMS to arrive? Who wants to carry around a plastic token to generate codes from? And who wants to gamble with adaptive when the alternative is so much easier? The answer has got to be the one we brought to the market and trademarked two decades ago …… ‘Tokenless’; utilize the devices you carry with you – one tap or swipe and you will be in. It’s that easy and its here now. We have a free trial, we know its so easy to install, use and manage that we let new clients trial for free and partners use it in their own enterprises. It’s also flexible enough that you can change the amount of users you want to use without paying a lot of money in advance, just pay as you go.

Two factor authentication just got even easier than using a password!