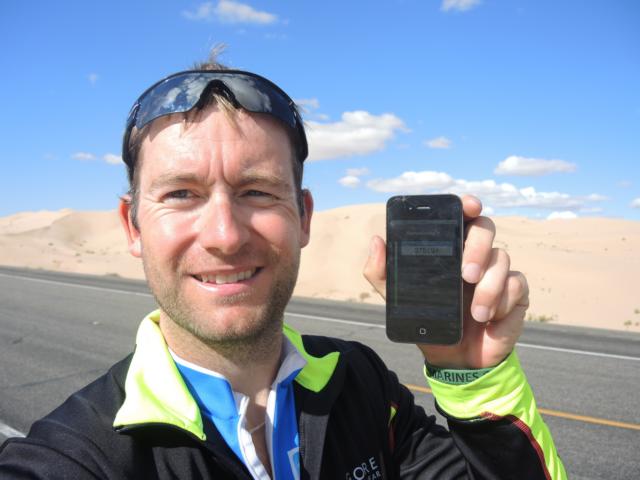 Travelling 18,000 miles around the world by bicycle: What sounds like the storyline for an adventure film was in fact the personal adventure of James Ketchell. After 214 days away, the British globetrotter has now completed his trip around the world. During the trip, he documented his experiences in a travel blog, for which he had to log in to a computer network, even under very difficult conditions. Ketchell managed to do this from all over the world without any problems by using the tokenless two-factor authentication solution from his sponsor SecurEnvoy. Access was possible even from regions with extreme climates.

Why did he get involved in such extreme sports? The journey of the Briton James Ketchell basically started in 2008: He survived a serious motorcycle accident but the doctors said that he would never be able to walk properly again. What sounds like an end for many people was in fact the beginning of a great challenge for Ketchell. He fought back and was able to successfully refute the gloomy diagnosis. In order to underline his new start in life, the extreme athlete rowed 3,000 miles across the Atlantic in 2010. But that was not enough for him: in 2011, Ketchell therefore climbed to the summit of Mount Everest in a six-week expedition. And then, in the summer of 2013, the playboy started the third part of his “personal triathlon”. The aim was to ride a bicycle around the world, which involved a total distance of 18,000 miles.

Return after 214 days in the saddle

Ketchell started his journey and ended it 214 days later in Greenwich Park in London, where he impressed listeners on his return with his description of the long trip: “In my personal triathlon, the bike trip around the world was the toughest challenge mentally. I had to really push myself every day to climb back into the saddle each morning and achieve my goal of 100 miles a day.” During his journey, Ketchell had to overcome a number of unexpected challenges. For example, he was chased by armed guards in India because he had accidentally erected his tent in the wrong place and then, a few days later, the cyclist was involved in a collision with a motorcycle rickshaw (Tuk Tuk). Luckily no major damage resulted and he was able to fix his bike.

Secure login from all manner of environments

Ketchell documented these and other experiences during his trip in a personal blog. For this, he logged into the computer network from areas covered in snow and desert, as well as other extreme climate zones. The SecurAccess tokenless two-factor authentication solution provided by his employer enabled him to log in securely from anywhere via smartphone, tablet or laptop. This was possible because, with the method from SecurEnvoy, the user does not require an additional hardware token for authentication purposes. To log in Ketchell simply entered his personal login details and a dynamically generated passcode, which he received via SMS, email, soft token app or a voice call. Ketchell tested the different methods during his journey and the SecurEnvoy procedure worked securely and reliably all over the world without limitations. More information about tokenless two-factor authentication solutions from SecurEnvoy is available at https://www.securenvoy.com.

James Ketchell already has a vision for his next adventure: He wants to row across the Indian Ocean with a good friend who suffers from epilepsy.